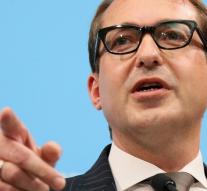 - Volkswagen has with the manipulation of the emissions of its diesel cars also violated European law. It has written to the German transport minister Alexander Dobrindt Friday to his European colleagues. The newspaper Bild am Sonntag Sunday it has revealed. A spokesman for the minister confirmed the news.

The chances of Volkswagen throughout the European Union to pay damages disintegrating. The letter from Dobrindt follows research by the German supervisory authority KBA.

It shows that the software program that the automaker installed in some diesel vehicles, is contrary to an article from an EU law . That regulation provides, inter alia, the approval of vehicles with regard to their emissions and access to maintenance information.