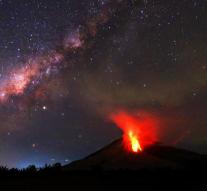 jakarta - The Sinabung volcano on the Indonesian island of Sumatra has recycled ashes. The smoke column came to 4.5 kilometers above the volcano according to the authorities. Residents are warned to be extra vigilant.

Since 2013, the Sinabung is active again. After several outbreaks, sixteen people died since 2014. Indonesia is in the so-called Ring of Fire. In this area around the Pacific Ocean, volcanic activity is particularly high. There are about 130 volcanoes in Indonesia.