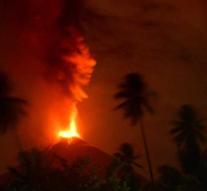 jakarta - The volcano Soputan on the Indonesian island of Sulawesi erupted Sunday morning. Above the volcano an ash cloud of almost three kilometers high was created, the authorities report.

Within a radius of four kilometers around the 1758 meters high Soputan a prohibited zone was set up. The last time the volcano threw miles of ash was in early October.

The island of Sulawesi, popular with holidaymakers, was hit by a severe earthquake at the end of September, which caused a tsunami. More than 2000 people have died.