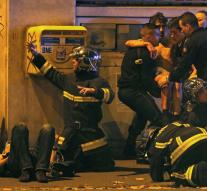 - The man who on behalf terror group Islamic State (IS) has claimed responsibility for the bloody attacks Friday in Paris, the 35-year-old Fabien Clain. The French intelligence services have recognized his voice reported the French newspaper Libération Tuesday. Fabien Clain is originally from Reunion Island and would now be in Syria.

Clain is known in the circles of French extremists. He comes from a group of jihadists around the Frenchman born in Syria Abdel Ilat al-Dandachi, known in France as Oliver Corel.

Corel founded late eighties in a village in the south of the country a kind of community that produced extremists such as Mohammed Merah. Merah killed in March 2012 terrorist attacks and robbed seven people's lives. Merah was then slain by police.