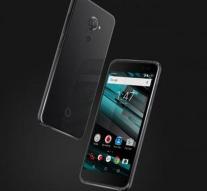 - Telecom Provider Vodafone brings in the Netherlands as its own high-end smartphone with virtual reality glasses off. The Smart Platinum 7 is similar in specifications similar to the toptelefoons LG, Samsung and Huawei.

The Android 6. 0-device has a 5.5 inch wide screen with a resolution of 1440 by 2560 pixels. Under the hood sits a octacore processor, 3GB RAM and standard 32GB storage memory latter is expandable with an SD memory card. On the back a fingerprint scanner is also available. There is also a 16 megapixel camera.

The device can thus also be placed in a VR goggles. This resembles the Gear VR Samsung, already has the Vodafone version two buttons at the bottom.