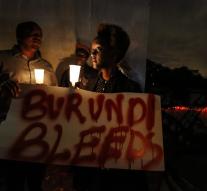 geneve - A civil war is about to break out in the central African country Burundi. According to the High Commissioner for the United Nations Human Rights, Ra'ad Zeid Al-Hussein, his political oppression certainly four hundred people were killed and 3,500 people were arrested.

\x26amp; quot; Burundi is on burst, is on the verge of a civil war hit \x26amp; quot ;, said the Jordanian prince in Geneva. He called on the international community to take sharp measures including travel bans and the freezing of funds.