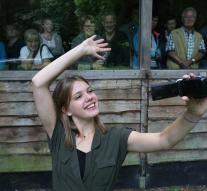 - Watching vlogs is becoming increasingly popular. Especially among young people. Of the 18-34 year-olds is 82 percent ever looked at a vlog. When over-50s this is 45 percent less than half, reports market researcher Multi Scope.

A vlog is a video diary. The Internet phenomenon is a variant of the blog, which mainly contains text.

MultiScope conducted research among more than a thousand Dutch. One in three at least once a month looks a vlog. The most popular exponent of vlogging is Enzo Knol. One in five Dutch sometimes looked at it on YouTube.


According to the study vlogs especially watched for leisure and entertainment. Six out of ten viewers show to watch this reason. A quarter is also looking to learn something, and 22 percent say they look for inspiration.