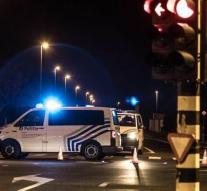 antwerp - A 48-year-old woman from the Belgian Laak Valley is in critical condition at the hospital after a bizarre accident on the N19 towards Antwerp. The Flemish was so badly injured that her legs had to be amputated. The victim is held in artificial coma.

The woman last Friday assisted her daughter, who had become a victim of a collision with a disgusting driver in the Flemish Geel. After the accident, he returned, but returned a moment later to drive in full on the woman. 'I immediately thought I was lost,' her husband said. 'She could see us standing. There were still cars passing and they were cared carefully past us. But this seemed to be an attack, 'he says in the Belgian newspaper Het Laatste Nieuws. '

The woman was not only badly injured on her legs, she also broke an arm. Although she is kept in a coma, the woman's doctors will survive the accident.

The battered motorist is back on foot but under strict conditions. She will not be able to leave her house after 21.00 and she has an alcohol and driving ban. According to the new Belgian traffic law, she can receive a jail sentence of up to three years and a fine of up to 5,000 euros.