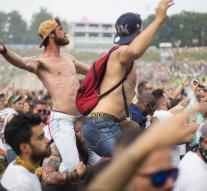 tree - Dozens of people who bought a ticket for the Belgian festival Tomorrowland are not welcome to the dance event in Boom. The police told VRT News on Tuesday that the data of about 400,000 ticketing purchases were thoroughly screened, after which 35 people were refused.

It is the first time that the Belgian federal police decide to screen festival gangers massively. 'That's how we're sure people do not walk around on the festival meadows we'd rather not have there,' said police spokesman Peter De Waele against VRT News. He did not want to go into detail about the criteria for denying access to people.

It is unclear whether Dutch people have been taken into consideration. 'But it is known that fifty percent of people on Tomorrowland do not have Belgian nationality,' said the spokesman. 'We have therefore looked at various other databases to see if there were any names that we would rather not have on Tomorrowland. '