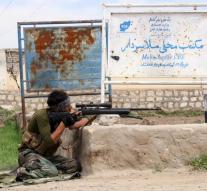 kunduz - The Afghan army on Sunday again a series of attacks on the city of Kunduz repulsed by the Taliban. Dozens of extremists were slain, said sources with the authorities.

Hundreds of Taliban participated in the attack on Kunduz. The offensive since the Taliban announced last week their spring offensive only intensified. The attacks on Saturday night seemed aimed at cutting the Chardara district from the rest of the city. Kunduz when the Taliban were briefly held last year they used Chardara as a base.

Estimates of casualties varied. Police in Kunduz spoke of 49 dead and 61 wounded by the Taliban. The MoD said the past 24 hours 38 killed and thirteen were injured. On the side of the police and security forces were four dead and eleven wounded, said a spokesman.