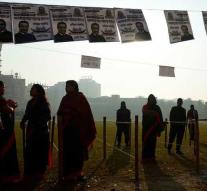 dhaka - In the case of violent skirmishes in the parliamentary elections in Bangladesh, at least twelve people were killed.

Supporters of the ruling Awami League and opposition party BNP fought each other on Sunday in different parts of the country to gain control over the polling stations. In some places, the votes were interrupted because of the violence. A polling station remained closed because the ballots had been stolen.