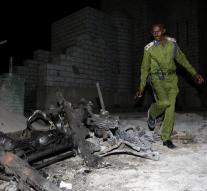 galkayo - A week again erupted after entering a truce between two semi-autonomous regions in Somalia are fighting. At least nineteen soldiers Sunday in the battle killed a border notify both armies.

The semi-autonomous regions of Puntland and Galmudug fight to the border town of Galkayo. Last week, a cease-fire between the two parties was reached, so that displaced persons could return home. give the two regions each blamed the violence in the city still has flared up again.