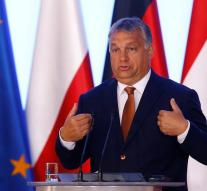 budapest - Hungarian Prime Minister Viktor Orban on Thursday re-arrange to discuss the refugee problem. The European Union, he said in an interview, should pick up and turn off all illegal refugees. Put them in North Africa or on an island in camps under the supervision of the EU and leave them to apply for asylum, reasons the Hungarian prime minister.

The man refugees using barbed wire keeps outside the Hungarian borders, think of large camps with armed guards. The funding is accounted for by the European Union. Who illegally enters the EU will disappear in such a camp, he argued.

' There is really only one solution where everyone has something: the migrants turn the union. \'Boundaries are there to use and help to keep the civilization of the world intact, said Orban.