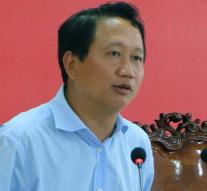 hanoi - Vietnam is very sorry that Germany accused the country of abduction of a Vietnamese businessman in Berlin. That's what the Vietnamese Ministry of Foreign Affairs said on Thursday. Vietnam wants to develop a 'strategic friendship' with Germany, according to the department.

Justice in the German capital reported on Wednesday that Trinh Xuan Thanh, a former senior official at the Vietnamese state oil company PetroVietnam, was abducted in Berlin and taken to Vietnam. That would have been done by the Vietnamese secret service. Berlin was a Vietnamese diplomat.

The Vietnamese police have previously stated that Trinh Xuan Thanh indicated himself in Vietnam. He had been looking for months for millions of losses made by the state-owned company.