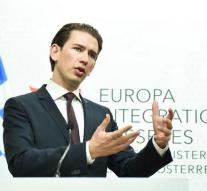 - Austria threatens uncooperative in extending the negotiations on Turkey's accession to the EU. Minister Sebastian Kurz (Foreign Affairs) hinted in an interview with the newspaper Kurier that he is prepared to use its veto.

,, I have a seat and a vote in the Council of Ministers of Foreign Affairs, '' Kurz said in the interview published Sunday.,, There it is whether we open new chapters in the negotiations with Turkey. I am against it. '' Turkey does not fulfill the conditions according to him.

Chapters refer to policy areas where Turkey must accept the European rules. So far, the process proceeds stiff: only one of the sections 35 has been completed. A new chapter can only be treated as the whole council agrees.