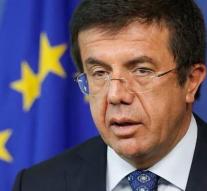 vienna - Austria does not allow Turkish Minister Nihat Zeybecki to attend a meeting to commemorate the coup last year in Turkey. The Austrian Foreign Minister Sebastian Kurz said Monday that the meeting will be a major event and the visit of a Turkish minister is at risk to public order.

Last Friday, the Netherlands made clear that Turkish Deputy Prime Minister Tugrul Türkes is not welcome and can not attend a meeting on July 15 in Apeldoorn.

On July 15, 2016, Turkish soldiers attempted a coup. They failed, mainly due to massive resistance of the population and lack of support from other soldiers. There were certainly 240 deaths and nearly 2200 injured.