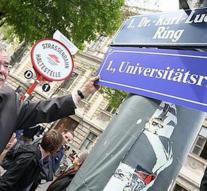 - The Vienna City Administration's explanation give streets and squares are named after people with a loaded past. There will hang signs with additional information about their background. It is the intention to make visible the history of the Austrian capital in place of that to cover up.

Fourteen of 28 text panels that will be installed, were presented Thursday. In the case of car maker Ferdinand Porsche (1875-1951) is now being drawn to his 'membership in the Nazi Party and the SS, the employment of forced labor as well as its activities in favor of the war industry. 'The Viennese former mayor Karl Lueger (1844-1910), admired by Adolf Hitler, has been criticized because of his undisguised' populist anti-Semitism 'that inspired the Nazis.

A committee of historians made the choice. thereby changing a street name can remain exceptional.