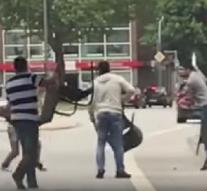 hamburg - Ombudsmen arrested on Friday in Hamburg that the 26-year-old man who was carrying out a massacre in a shop in the German city could be detained by the police.

A witness has filmed from a car how a group of men raises the perpetrator on the street and contests furniture. The man's huge knife is clearly visible.

The knight-trigger was born in the United Arab Emirates. According to Der Tagesspiegel, the suspect was known to the German authorities as a very religious Muslim.

The man randomly entered a supermarket with a big knife on customers. A 50-year-old German died. The police reported that five people were injured by the attacks, some of whom were serious. A sixth person suffered injuries when he helped to overcome the man.