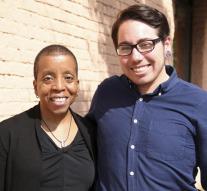 - Universities in the US state of North Carolina should visit the toilet up three transgenders that suits their identity. A judge has determined this Friday (local time). They are two students and one employee.

According to the former President George W. Bush nominated Judge Thomas Schroeder, the three complainants equivalent to a good chance if they sue. A federal law passed in 1972 prohibits discrimination on the basis of sex in federally funded schools.

The ruling is a partial victory for those who fight against the strict regulations of the state in the toilet. Most transgender people in the state should continue to adhere to the law adopted in March which stipulates that they may only visit toilets in public buildings and public schools that match the sex is in their birth certificate.


The injunction Schroeder restores the status quo that existed in North Carolina went to the new law in March. That means that public institutions must again look at each individual complaint by a transgendered, instead of the new regulations,, to all persons in all buildings and apply in all circumstances, '' said Schroeder.

The debate on transgender rights has focused on the issue of toilet access in the US, especially after the law in North Carolina caused international uproar. Several organizations and artists, including the NBA and Bruce Springsteen, canceled their planned activities in the state.