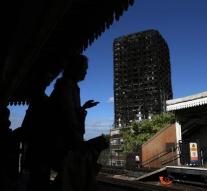 london - The UK authorities have already spent 4.5 million euros on hotel rooms for victims of the Grenfell fire. Certainly 180 families have been sleeping in hotels for ten weeks.

A total of 6.8 million euros have been deducted for the victims, according to The Guardian, based on figures that it requested. Most of it has gone up to hotel rooms in 49 different hotels, with 180 other families sleeping. These would be housed in suburban homes in July, as Prime Minister May promised shortly after the disaster.

Delivering that pledge proves harder than thought. The authorities try to deliver tailor-made, but by the large numbers it is difficult. More than one hundred properties have now been purchased and nine families have accepted new housing. 35 rental apartments are also rented. In total, almost twenty million euros have been released for victims. The bulk of this will be divided.

'In the coming months, we will spend tens of millions to buy new homes,' said local director Elizabeth Campbell on Wednesday. 'Let me be clear: we will not stop before every Grenfell survivor has found shelter. '

The fire caused at least eighty deadly victims on June 14 when Grenfell tower burned completely, causing terrifying stories. After the disaster, there was a lot of criticism. For years, nothing would have been done with complaints about the defective fire safety of the building. Also about the settlement of the disaster was complained.