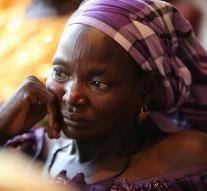 lagos - Nigerian women and girls are raped fleeing terror group Boko Haram and exploited by, among other soldiers and officers. With that accusation comes Human Rights Watch (HRW), which refers to 43 cases of sexual exploitation.

The victims were accommodated in seven refugee camps in the city of Maiduguri. At least four women told the rights group that they were drugged and raped. In other cases, leaving victims lured into having sex with the false promise that a marriage or financial aid would face.

HRW researcher Mausi Segun called it 'scandalous' that traumatized women also have to agree wary of people who are supposed to protect. Some victims were more likely by Boko Haram have been forced into marriage.

Nigerian President Muhammadu Buhari responded 'worried and shocked' by the allegations. He has ordered the matter immediately to find out.