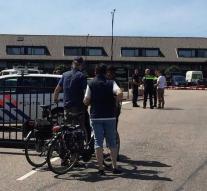 zandvoort - The man shot this afternoon at the Van der Valk hotel in Akersloot is 47-year-old Hennie Schipper from Zandvoort. That reports sources of The Telegraph.

The police only want to confirm that it is about a 47-year-old man from Zandvoort. Schipper is a gold trader from the North Holland seaside resort.

The skipper was shot several times after two o'clock in the parking lot of the hotel along the A9. He died on the spot. The suspected perpetrator went away, but did not report much later at the police station in Zaandijk. The police could not say anything about the motive.