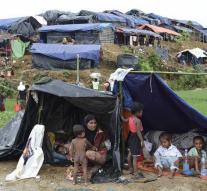 new york - The government in Myanmar is concerned about the situation in the state of Rakhine, where thousands of Rohingya Muslims fled. Vice-President Henry Van Thio said that at the United Nations meeting in New York.

According to Van Thio, security services are working to spare innocent citizens. Human rights violations are dealt with in accordance with the strict standards of law.

The oppressed Rohingya has been raped in Rakhine and massed. Currently, over 400,000 people have gone to neighboring Bangladesh to escape military violence. The UN speaks of ethnic cleansing.

According to the Vice President, it is not only Rohingya Muslims but other minorities fled. He adds that since the beginning of September there have been no collisions between the army and the population. 'We need to figure out what the reason for this exodus is,' said Van Thio.