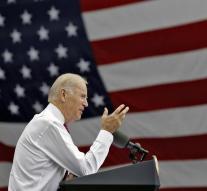 - The outgoing US Vice President Joe Biden has no interest in becoming the new chairman of the Democrats. He will not be a candidate for the post, said a spokeswoman for Biden told CNN. The 74-year-old Biden wants to actively participate in plotting the course of the party.

Democrats elect a new president in the spring of 2017. At this time, the function on an interim basis is completed by Donna Brazile, after her predecessor Debbie Wasserman Schultz had to resign because of an email scandal.

Joe Biden does have considered becoming president, but decided not to do this in his own words, because he still mourns cancer recently deceased son.