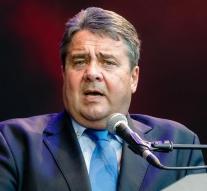 - Middle of a debate about NATO's policy toward Russia is contemplating the German Vice Chancellor and Minister of Economy Sigmar Gabriel (SPD) next Monday to Moscow. He was with Russian President Vladimir Putin to discuss economic relations, which are suffering under sanctions from the European Union.

A spokeswoman for the ministry would not confirm plans for the one-day visit Tuesday. The newspaper Rheinische Post reported that the office of Chancellor Angela Merkel on the planned trip by Gabriel informed.

German Foreign Minister Frank-Walter Steinmeier, a party colleague of Gabriel, practiced over the weekend criticized the 'saber-rattling' of NATO to the eastern border of the alliance.


Gabriel also spoke with Putin in Moscow in October 2015. The conversation then took two hours longer than expected. Merkel itself was most recently by Putin in Moscow to commemorate the end of World War II in May 2015.