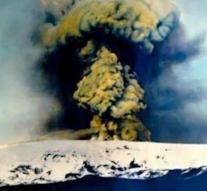 reykjavik - In Iceland, all alarm bells From now on the largest volcano in the country heavy vibrations are felt.

It involves two earthquakes with a magnitude of more than four on the Richter scale were measured Monday morning. Those were the worst since 1977. The two quakes were followed by another at least ten vibrations.

The last major eruption of Katla was in 1918 when the volcano spewed ash five weeks. After that there were no fewer major eruptions in 1955 and 1999, the ice in the crater of the 1,450 meter high volcano did not break.


There are fears of a repeat of the eruption of the Eyjafjallajökull eruption paralyzed by a part of the international traffic in 2010. Katla is a much bigger that the effects can thus be.

Historically, Katla burst one to two years from Eyjafjallajökull.

Katla is held by means of dronesin the holes.