Home / World / Vetoes of Russia and China to withstand Aleppo 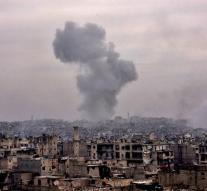 - Russia and China on Monday at the United Nations Security Council vetoed a resolution for a seven-day truce in the northern Syrian city of Aleppo. According to Russia would give the rebels a chance to regroup.

The resolution was submitted by Egypt, Spain and New Zealand. The truce was intended to allow humanitarian assistance to the population.

It was the sixth for Russia and China for the fifth time it vetoed a resolution on the conflict in Syria, which broke out in 2011. Venezuela also voted against. Angola abstained, while the other eleven members of the Board voted in favor.

Syrian government forces managed to recapture past week in many parts of eastern Aleppo on rebels.