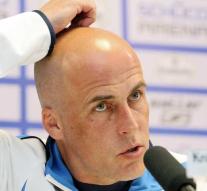 amsterdam - The drug WAY-316606 has been around for a long time to treat osteoporosis, but it helps against baldness, nobody knew. Yet it seems true; scientists are enthusiastic.

The drug, known as WAY-316606, has been used a lot for years to combat osteoporosis, but in the laboratory a new trait appears. When the product comes into contact with hair follicles, a certain protein is stimulated, which activates hair growth.

Eventually it appears that the hair follicles become a lot more active. The same protein also plays a role in baldness. 'This is a very interesting study,' confirms a spokesperson from the British Association of Dermatologists.

'That this new drug, which has never before been associated with hair loss, clearly stimulates hair growth, is exciting. It may just, one day, make a big difference for people who suffer from baldness, 'says head researcher Nathan Hawkshaw of the University of Manchester against The Independent.

Yet an actual breakthrough is not yet forthcoming. 'More research needs to be done before it can be used in people with baldness,' said a spokesman for the Association of Dermatologists, while the researchers expressed similar wording. 'Clinical research is needed to see if it is actually effective and safe. '