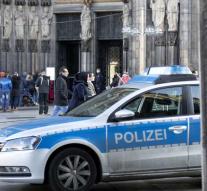 dusseldorf - With the discovery of the toxic substance ricin in a Cologne home and the arrest of the two residents, 'very likely' a very lethal attack with poison in Cologne has been thwarted. This said the head of the German internal security service (BfV), Hans Georg Maassen, against the Rheinische Post.

Maassen stressed that the investigation has not yet been completed, but everything indicates that a terrorist attack has been prevented. The main suspect is the 29-year-old Tunisian Sief Allah H., who has been living in Germany since the end of 2016. His wife has since been released. The man was already some time ago in the sights of the police and BfV through his suspicious purchases on the Internet.

Sief Allah H. mixed toxic substances at home with an electric coffee grinder bought on the internet. In this way he did not only endanger local residents, but also his own wife and children.