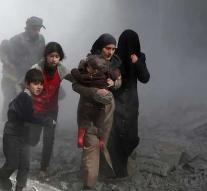 damascus - The Syrian region of East Ghouta has been through the bloodiest week since 2015. Over the past four days, at least 229 people have been killed by attacks from government forces, reports the Syrian Observatory for Human Rights. This is based on local sources.

Forty 58 children lost their lives as a result of the shelling, said the head of the UK-based Observatory. The Syrian regime would have bombarded the besieged rebel region east of Damascus with artillery. Air attacks have also been carried out.

International concerns are being expressed about the continuing violence in Syria. 'Citizens are the targets. In Idlib and in the east of Damascus ', French minister Florence Parly (Defense) told a radio station. 'We follow developments very carefully. The air attacks must stop. '