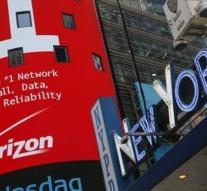 This was reported Bloomberg Tuesday.

Equinix does most data centers in the world. It invests in the coming period € 100 million data center in Amsterdam. Around Schiphol and Amsterdam, the group are large networks.

Equinix with Interxion, Global Switch, Colt and Verizon for the Netherlands accounted for € 100 billion in market value, calculated consultant Deloitte recently the digital infrastructure. The companies additionally make this year a growth of about 9%. \u0026 Nbsp;