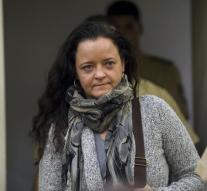 munich - The German Public Prosecutor General complains Beate Zschäpe (42) for complicity in all the murders and attacks between 2000 and 2007 of the Neonazist National Socialist Underground (NSU). If the court is involved in this, then it imposes a lifelong imprisonment on her head.

The German prosecutor named Zschäpe on Tuesday before the court in Munich, co-founder and member of a terrorist organization. She would have helped Uwe Mundlos and Uwe Böhnhardt to kill a total of ten people of Turkish or Greek origin and a German police officer. She would also be involved in two bomb attacks and several robberies.

The prosecutor describes NSU's crimes as the 'most violent and most notorious' terrorist attacks since that of the extremist Rote Armee Fraktion (RAF). 'The motive for these crimes is an extreme right ideology with the aim of a' foreigner-free 'country. '

Zschäpe denied complicity in 2015, but the prosecutor says that after the four-year trial he has found sufficient evidence against her. In the coming days, the prosecutor will announce the claim, probably following the summer holiday. Zschäpe is the only survivor of the three suspects, Mundlos and Böhnhardt committed suicide in 2011.