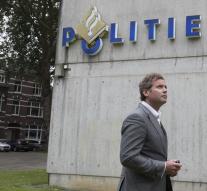 - The Heerlen councilor Christian Petermann (40) Monday heard what pronouncing judgment on him, the court in Maastricht for his so-called 'kampbeultweet. In it he compared a prosecutor in the trial of the Roermond politician Jos van Rey with SS camp guard Irma Grese.

He called in the conscious tweet the sentence demanded by Van Rey disproportionate to that in the same breath adding:,, I hope Anja Janssen De Boer or 'the Irma Grese 'of OM' still crashed tonight. '

In two newspaper interviews, he would have said,, that the misery caused by OM 27 times worse than those in the concentration camps. ' Petermann denies this.


The Prosecution during the proceedings forty hours of community service which twenty hours conditional sentence for Petermann. He must deposit as it is up to the Prosecutor, 500 euros in the coffers of the Auschwitz Foundation.

The court in Rotterdam Van Rey has now sentenced on July 12 to 240 hours of community service. The former VVD was on trial for corruption, electoral fraud and money laundering.