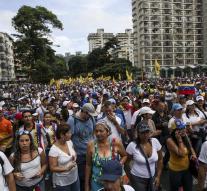 caracas - Hundreds of thousands of opposition supporters on Thursday in Venezuela took to the streets to demand the departure of the government. Wrapped in white chanted the demonstrators,, This government will fall, '' as they marched through the streets of the capital Caracas.

,, We will Maduro overthrow, '' said one of the protesters on the unpopular president. According to the opposition at least one million people took to the streets to demand a referendum on the fate of Maduro.

Venezuela is in a deep economic crisis. The country is highly dependent on the sale of oil and the falling prices on the world market, the state budget has collapsed. The International Monetary Fund predicts that inflation will be released this year comes to 480 percent and 1600 percent next year. At the most basic goods, from food to toilet paper, have serious deficits.