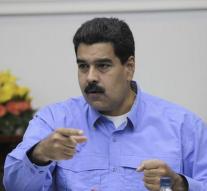 geneva - Venezuelan President Nicolas Maduro will announce the opening session of a three-week session of the UN Human Rights Council on September 11th. 'We have received a verbal confirmation that he comes,' said UN spokesperson Roland Gomez. 'He will speak at the opening of the session.'

Maduro's government has recently been heavily criticized by Washington, the United Nations and Latin American countries for pushing the opposition-dominated Congress, defeating protests, raising hundreds of opponents and countering humanitarian aid in the country to alleviate the serious economic crisis.