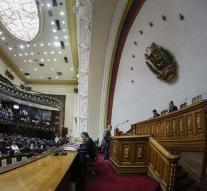 caracas - The Venezuelan parliament, dominated by the opposition, has officially lost its power. The new constitutional council, nominated by a dubious election in favor of President Nicolás Maduro, adopted unanimously a unanimous resolution on Friday as a result of which Parliament finally got out of control.

Maduro's opponents accuse the socialist leader of establishing a dictatorship. The council, which counts 545 Maduro-members, is now itself the highest legislative and executive power in the country. In practice, not so much changes. The Supreme Court has blocked almost every law that constituted the conference since 2016.