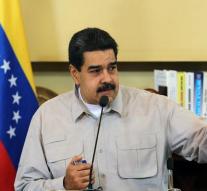 caracas - The Venezuelan opposition has denounced Wednesday's talks with President Nicolás Maduro's government to resolve the deep political crisis. The chairman of the Foreign Policy Committee of the Foreign Parliament, Luis Florido, said that the conditions for the talks in the Dominican Republic were not met.

By mid-September, both parties had negotiated the conditions for dialogue under the auspices of the President of the Dominican Republic, Danilo Medina. The opponents of the government demand the release of political prisoners, a timetable for elections and the restoration of parliamentary powers.

In early August, a constitutional meeting was set up with 545 members after an election boycotted by the opposition. It is dominated by government-owned socialists and has taken over parliamentary tasks as a state organ.

Opposition politicians are threatened with severe penalties. Many Western countries accuse Maduro of establishing a dictatorship. Since April there have been violent protests against Maduro, more than 120 people were killed.