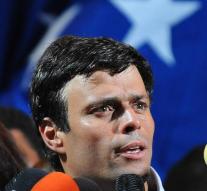 caracas - Venezuelan court sentencing of opposition leader Leopoldo López for his part confirmed in recent bloody anti-government demonstrations. Lopez had appeal because the trial would only serve to silence him, but the judge rejected that. Lopez, who is serving a sentence of fourteen years, thus remains behind bars.

The Venezuelan opposition and the United Nations have been pushing for a long time for the release of López. The prosecutor in Lopez 'lawsuit, which Venezuela has now fled, said since the process is a charade inspired by political motives.

The parliament, where Lopez 'supporters have a majority, earlier this year adopted an amnesty law to which could benefit the opposition leader, but the government put a stop to the High Court for relief.


2014 López led the opposition to the left-wing President Nicolas Maduro. According to the government, he continued his supporters with subliminal messages to violence.