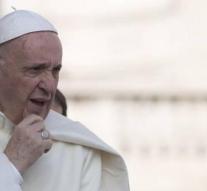 caracas - The Venezuelan opposition invoked the help of Pope Franciscus to put an end to the serious political and economic crisis in the country. The leader of the Roman Catholic Church should urge the Socialist government of President Nicolás Maduro to accept humanitarian assistance and respect for human rights.

'Our country is in an unprecedented crisis,' said Parliament's President Julio Borges on Thursday. It is lacking in Venezuela of everything, especially food and medicine. The regime denies that and points out the assistance offered by, for example, charity institutions.

Due to the low oil price, corruption and years of mismanagement, Venezuela has virtually no currency for importing the most necessary goods. The stores often sell no for daily needs. 'Those who are in charge of hunger, close the door for humanitarian workers and defend their power at a cost,' Borges said.

Maduro put the parliament in which the opposition had a majority, recently out of play. Many opponents entered prison.