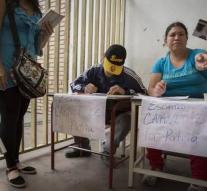 caracas - Venezuelan Attorney General Luisa Ortega Díaz has announced an investigation into the controversial elections last Sunday. This reported Venezuelan media on Thursday. The reason is the announcement of a company that has technically supported Electoral Elections for years, Smartmatic. The company reported that the official rate of return (41.5 percent) 'can be undoubtedly incorrect' and that it should be lower.

The 'high rise' was a reason for the unpopular president Nicolás Maduro on Monday to proclaim himself as a winner of this poll. Ortega Díaz has emerged as Maduro's opponent. She said Sunday could be 'a very serious electoral fraud has been committed and probably not yet voted 15 percent of the electorate.'

The electoral council has condemned the statement of Smartmatic as irresponsible.