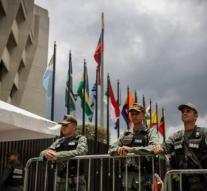 santiago - Two Venezuelan judges nominated by parliament for a post in the Supreme Court sought refuge in the Chilean embassy in Caracas. Beatriz Ruiz Marin and José Nunez Sifontes are 'guests' of the embassy, ​​confirmed the Chilean Foreign Minister on Tuesday (local time).

On Saturday, Judge Elenis Del Valle Rodríguez also fled to the embassy. The three lawyers belong to a group of 33 judges of the Supreme Court, which was sworn by parliament on 21 July. In parliament, a coalition of opposition has the majority. This coalition does not recognize the government of President Nicolás Maduro.

Opposition politician Roberto Enríquez has been in the embassy since early April. The President of the Christian-Social Party Copei had requested protection as a result of the political situation in his country. Cause of recent tensions was the election of a constitutional meeting last Sunday. The opposition boycotted this election.