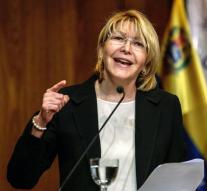 Earlier this week, the public prosecutor announced an investigation into the controversial election of the 'constitutional assembly' last sunday. The Venezuelan opposition boycotted the election because it consists of Maduro supporters and is seen as an attempt to undermine the elected parliament.

It has been restless in the South American country for months. Certainly 125 people came across confrontations between protesters and security forces over the last four months.