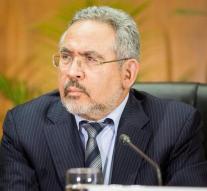 caracas - Despite the new sanctions imposed by Venezuela on Venezuela, the South American country has made $ 5 million (4.2 million) available to help victims of Hurricane Harvey in Texas.

This happened via Citgo Petroleum Corp., Which has an oil refinery in Corpus Christi with a capacity of 157,000 barrels a day. It is a subsidiary of the National Venezuelan Petroleum Company PDVSA.

Citgo grants financial support through local mayors and pays a percentage of oil yields for the construction and layout of homes and shelters. 'We show our solidarity with the Americans affected by the hurricane,' said Foreign Minister Jorge Arreaza on Venezuelan state television on Wednesday.

PDVSA topman Nelson Martinez sat on his side. 'When an American fills his tank at Citgo's pumping station, he contributes to the reconstruction of the affected communities,' said Arreaza.