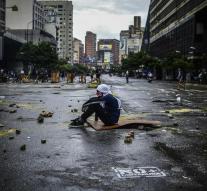 caracas - In Venezuela, a national strike began on Thursday against President Nicolás Maduro. According to observers, the capital Caracas is extinct and its shops are closed. With barricades calling the protesters 'trancazos' (hard battles), traffic is thwarted. The 24-hour strike puts opposition pressure on the regime.

Last weekend, millions of Venezuelans voted on improvised polling stations against the current left-populist government in an unofficial referendum on the regime. That wants to remain in power by turning off parliament.

The government is due to the enormous shortages of basic needs, violent crime and inflation, which according to observers can reach 950 percent this year, very unpopular. Since March there have been major protests and in many places barricades were raised. The violence around the protests has already dropped about one hundred deaths.