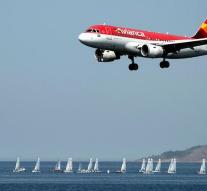 caracas - A Venezuelan bomber intercepted a Colombian commercial aircraft and forced to leave the Venezuelan airspace. It is a passenger plane from airline Avianca, which were 200 passengers and was en route from Madrid to Bogota. That made the Colombian Defense Ministry Saturday (local time) known.

According to local media, the jet arrived Friday so close to the passenger plane that went off in it the alarm to warn of a potential collision. Just before the airliner Venezuela flew and flew into the Colombian airspace, the fighter took away again and flew further north.

Colombian Defense Minister thereupon contacted by phone wanted with his counterpart in Venezuela. Colombia says Venezuela has promised to investigate the incident.