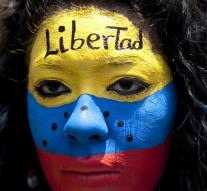 caracas - Venezuela is now the most dangerous country in Latin America. It has this year was a sad record with approximately 27 875 people who died a violent death. This was reported by the Venezuelan Observatory of Violence. Which states that Venezuela with more than 90 deaths per 100,000 inhabitants violence Central America Honduras surpasses.

In 2014 the observatory had 'only' 24 980 murders in the economically stagnant country of over 33 million inhabitants. Of all the approximately 145 000 killings in Latin America and the Caribbean, was committed in 2015 19 per cent in Venezuela.

The least violent country in South America is Chile. It has about three homicides per 100 000 inhabitants and that is still more than three times as much as in our country.