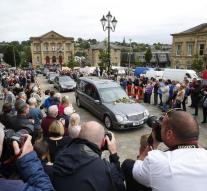 batley - British parliamentarian Jo Cox, who was killed last month because of her political convictions, was buried today.

The farewell took place in private. However, the funeral procession held a few times silently, so spectators could pay their respects. Many spectators had flowers in them and applauded as the hearse passed.

Cox was shot on June 16 and stabbed in the street after a meeting with voters in her district. The 52-year-old suspect, Thomas Mair, is stuck and must appear on November 14 before the court.

'I was standing next to the truck '