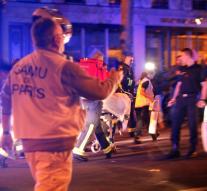 - The Vatican has the series of attacks in Paris Saturday described as " terrorist insanity."

The leadership of the Catholic Church demands a resolute response to these acts of " murderous hatred ", according to a spokesman. " We condemn the attacks along with the pope and all peace loving people in the most emphatic manner. "