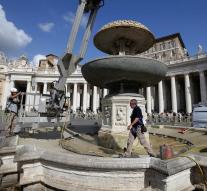 rome - Rome has been burdened for some days under water scarcity. The need is so high that the Vatican has dried a hundred fountains. Nobody can remember that happened earlier.

The fountains include the two famous baroque specimens on St. Peter's Square. In Vatican City and the surrounding Italian capital, no rain has fallen over the past period. Rome has already closed the public cranes on the street.

The municipality is now considering even ransoning the drinking water. According to The Guardian, that means that about one million Romans can only have water for eight hours a day. Southern Europe currently has a heat wave.