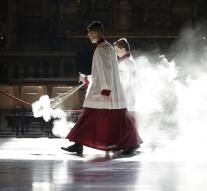 - Financial researchers think the accountant department APSA of the Vatican in the past has been used by others for embezzlement on a large scale. They argue that in a report seen by Reuters.

The report covers the years 2000 to 2011 and was handed over to Italian and Swiss researchers. In these countries accounts would be used for fraud. There is talk of money laundering, insider trading and market manipulation. The APSA manages include the assets of the Vatican such as shares and property.

The report called the name of the head of a private bank which presumably with the knowledge of the leadership of the APSA fraud led to accounts of the Vatican. Earlier, former president of the APSA Nunzio Scarano been accused of money laundering, among others.